One of the grand illusions of the Oslo Accords was creating an image where the Palestinian Authority has some sort of administrative control over all of the West Bank. While on paper, the PA exercises a modicum of token control over Areas A and B, it pales in comparison with the absolute control that the Coordination of Government Activities in the Territories holds, as it has formal authority over 80% of the West Bank, and in practice, 100% of the West Bank through security agreements. There is actually more land allocated for “Firing Zones” than there is for Area A, the land on which Palestinians are supposed to be able to exercise self-determination. These large swathes of land designated only for military activity disrupt lives of thousands of Palestinians as it slices across the bottom of the West Bank and up through the Jordan Valley. Even though Um al-Khair sits outside of the 918 Firing Zone, their proximity to the Israeli military training area has impacted their tiny community. 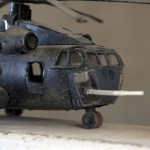 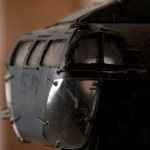 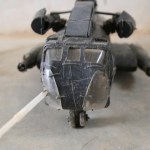 “This piece was inspired by helicopters flying above Umm al-Khair and the 918 Firing Zone. Living in Um al-Khair, we watch helicopters and jets fly over all the time. We often wonder if it is an actual training or if they are going to drop bombs somewhere, like on Gaza,” explains Eid.

“These helicopters are a part of our lives. This piece was made from a plastic bucket that I found while crossing the valley near my home. The helicopter passed above at the same time as if there was a connection between it and the bucket.  In making the helicopter, I found pictures on the internet, and I thought about how they are fast, how they can save you, and about their role in the war.”