Support the community of Um al-Khair

On May 2, 2019, the Israeli Civil Administration arrived in Um al Khair in order to cut the fence of the animal barn to confiscate it. The animals now have no place to stay, as there is no longer an enclosure for them. This is not only a small impact on a Bedouin community whose lifestyle traditionally revolves around animal herding. At the time of the soldiers’ arrival, there was no international presence and most of the men were away at work or elsewhere because the military arrived at around ten in the morning. Many of the children were also at school, meaning that women and small children were alone and vulnerable in the village.
The Civil Administration attempted to arrest at least two of the men present, but only one was taken into custody—Hajj Suleiman. When the soldiers arrived, they were overheard sharing specific orders to arrest him. In the process of being arrested, his hand was injured as it was hit by a soldier’s gun, and furthermore, his arm and shoulders were injured after he was taken into the military vehicle. The soldiers took him into the vehicle, away from the cameras of the people who were able to film what was going on, made him lay on the floor of the vehicle, and forced his shoulders back with their legs. Eventually, he was released, but hours later he has been taken to the hospital as he is still unable to move his right arm. 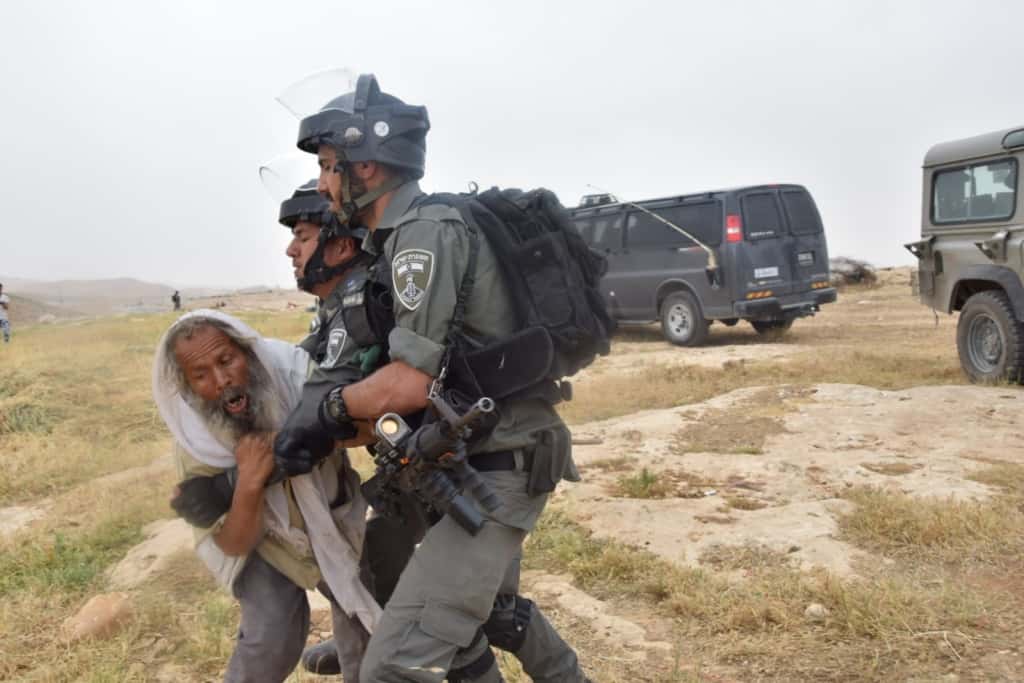 The demolitions are an illustration of the limitations of community building—while it is important that communities can see each other’s perspective, it is not understanding alone that will change demolitions for Um al Khair or any other village. Rather, we are calling for action in the form of policy changes that restructure the flow of resources. We already know that the occupation is bad—we live with it every day and suffer under a regime that creates endless trauma and fear that exists on a daily basis.
But more importantly, we know that the occupation is not a body on its own. The occupation exists because of the flow of resources from the Israeli government, but also charities and individuals in the United States and other countries. Unless we enact campaigns to create real change in policy and the flow of resources, all of our well-intentioned love, understanding, empathy, solidarity, and community with these villages and people will be for nought. If we do not aim to change systems with our work, we will not change anything on the ground. Animal barns—and worse yet, children’s homes—will continue to be demolished and community leaders, including elders like Hajj Suleiman, will continue to be abused at the hands of teenage soldiers armed with weapons and the protection of apartheid law.