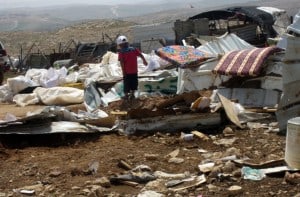 Please join us by sending a message to your 2 Senators and to your Representative, to ask them to intervene on behalf of the Palestinian villagers of Um al-Khair.

The village of Um al-Khair, a West Bank Palestinian Bedouin village, is under threat of expulsion. After many years of home demolitions, on January 10th 2018 the Israeli Civil Administration issued another set of stop-work orders to the people of Um al-Khair. These orders will turn into yet more home demolition orders. The villagers of Um al-Khair are asking for internationals to pressure their local governments to force Israel to halt and reverse the decision to demolish their homes.
Watch Amnesty International’s video here to get a sense of the situation in Um al-Khair:

Um al-Khair is a small Bedouin village located in Area C in the South Hebron Hills of the West Bank. Currently, 151 buildings in the village have demolition orders (a brutal consequence of the villagers having no choice but to build without a permit). Every building has already been demolished at least once and rebuilt by the community. People live in fear, not knowing when bulldozers will come for their homes. Demolition orders extend to wood burning stones where villagers bake bread, and lavatories. According to the UN, there have been 20 home demolitions since 2011, that have displaced 154 people (of which 103 were children). In total, 32 buildings have been demolished since 2011, impacting 213 people. There were three demolitions on October 27th and 28th, 2014, followed by the confiscation on November 1st of tents provided by the International Committee of the Red Cross and a Palestinian Ministry. Tents were the only shelters for families made homeless during a very cold winter. The communities are facing an existential threat.

The Hathaleen tribe was forced off their lands in al-Arad during the 1948 war. They bought the land in Um al-Khair from the nearby city of Yatta. While the Israeli Civil Administration acknowledge their ownership over the land, they are not allowed to build on their land. In contrast, the illegal Israeli settlement of Carmel, established in 1981 after being deemed “state land” by the Israeli Civil Administration, enjoy rapid expansion and international support. According to maps provided by the Israeli Zoning and Planning rights organization Bimkom, the Carmel settlement is set to expand and completely encircle the village of Um al-Khair in the coming years. If this happens, this Bedouin community will no longer have access to their natural grazing routes. As this community relies on their goats and sheep as their central source of income, the expansion of the Carmel settlement will decimate their means of income. When analyzing the maps of demolition orders, it is clear to see that this is an Israeli state-sanctioned plan to drive the Hathaleen families off their lands in Um al-Khair to make room for further settlement expansion. 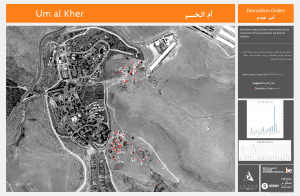 This map shows the illegal Israeli settlement of Carmel, a well-developed neighborhood next to Um al-Khair. The red dots represent all the pending home demolitions in Um al-Khair. This map was prepared by the Israeli zoning and planning rights organization Bimkom. 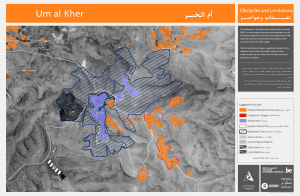 This map reveals the extent of plans for settlement expansion, further cutting off the villagers in Um al-Khair from their land and livelihoods.The blue outline marks where they intend to build, isolating the Hathaleen family further until they have no choice but to leave.

Why are their houses being demolished?

Under the Oslo Accords the West Bank was separated into three areas of jurisdiction Area A, B, and C. Um al-Khair is located on Area C which encompasses 61% of the West Bank. Area C is under full Israeli Civil and Security control. Permission to build on the land, therefore, must be granted by the Israeli Civil Administration. Building permits are few and far between for Palestinians in Area C. According to B’Tselem Israel has deemed 70% of Area C (42% of the West Bank) state land, survey land, firing zones, nature reserves, national parks, and settlements as well, they have continued preserving the apartheid wall that has annexed large swaths behind the green line . Thus limiting the opportunity for development of Palestinians lands. In addition, the odds of being granted a building permit on the other 30% of Area C is unlikely. Between 2010 and 2014 only 33 out of 2,020 (1.5%) were granted with only 1 of those occurring in 2014. This limit of permits by the Israeli Civil Administration leaves many Palestinians with no choice but to build without a permit if they want a roof over their family’s heads, exposing them to the risk of stop-work orders and demolitions.

This request is urgent because the community fears that demolitions will take place this summer. Help the people of Um al-Khair access their unalienable human rights and dignity

Come Visit us This Weekend