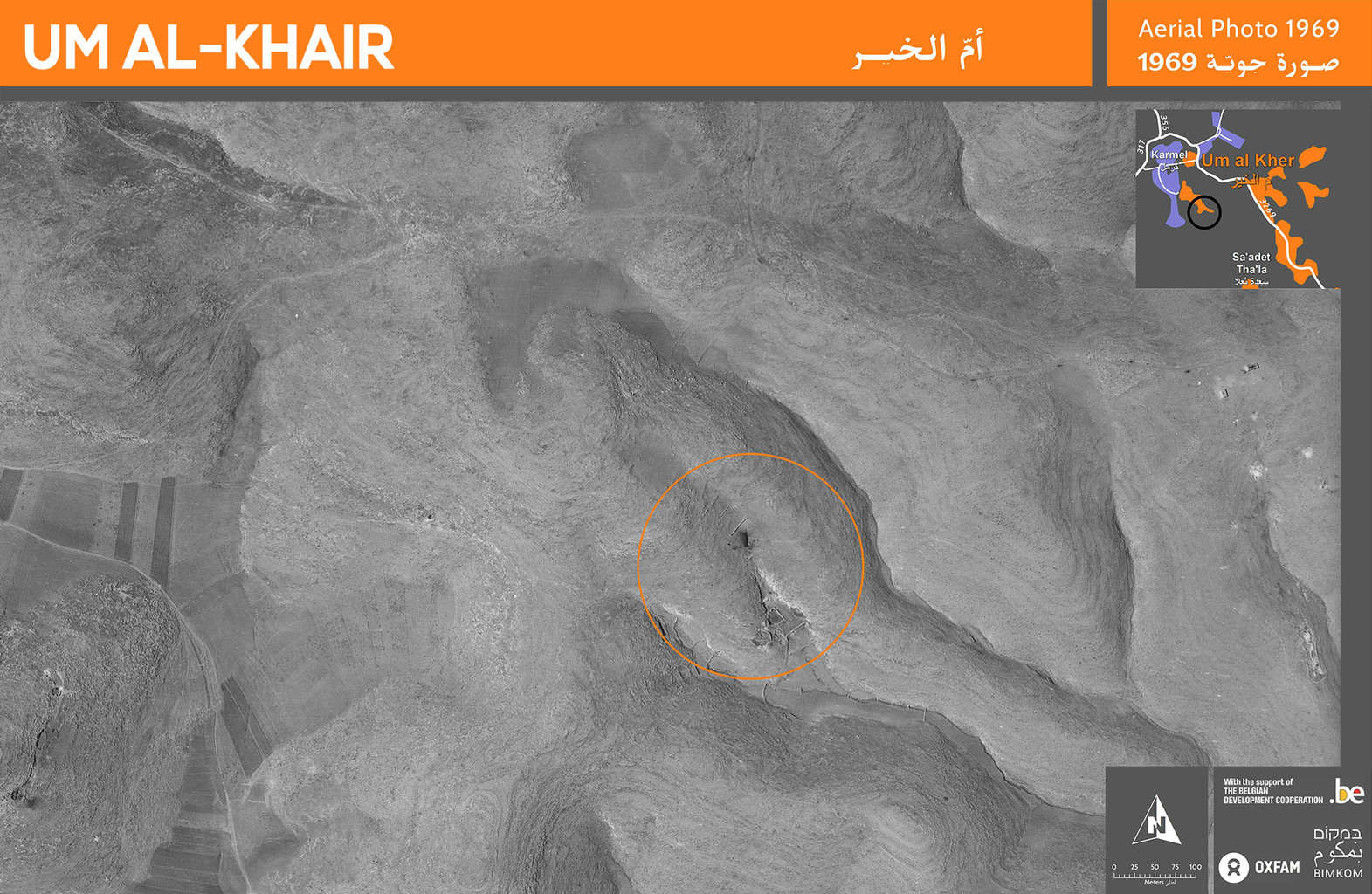 The above photo is an aerial shot taken in 1969 of Um al-Khair. The aerial photo shows the caves in the valley that Hathaleen families utilized and lived in prior to the establishment of the Carmel settlement. Map provided by Bimkom.

The Hathaleen tribe was forced off their lands in al-Arad during the 1948 war. They bought the land in Um al-Khair from the nearby city of Yatta. While the Israeli Civil Administration acknowledges their ownership over the land, the community is not allowed to build on it. In contrast, the illegal Israeli settlement of Carmel, established in 1981 after being deemed “state land” by the Israeli Civil Administration, enjoys rapid expansion and international support.

A small Bedouin village located in Area C in the South Hebron Hills of the West Bank,  Um al-Khair currently has 151 buildings in the village with pending demolition orders. Nearly every building has already been demolished at least once and rebuilt by the village. People in the community live in fear, not knowing when the bulldozers will come for their homes. Demolition orders are not limited to homes, but also extend to the wood burning stones where villagers bake bread and the lavatories. 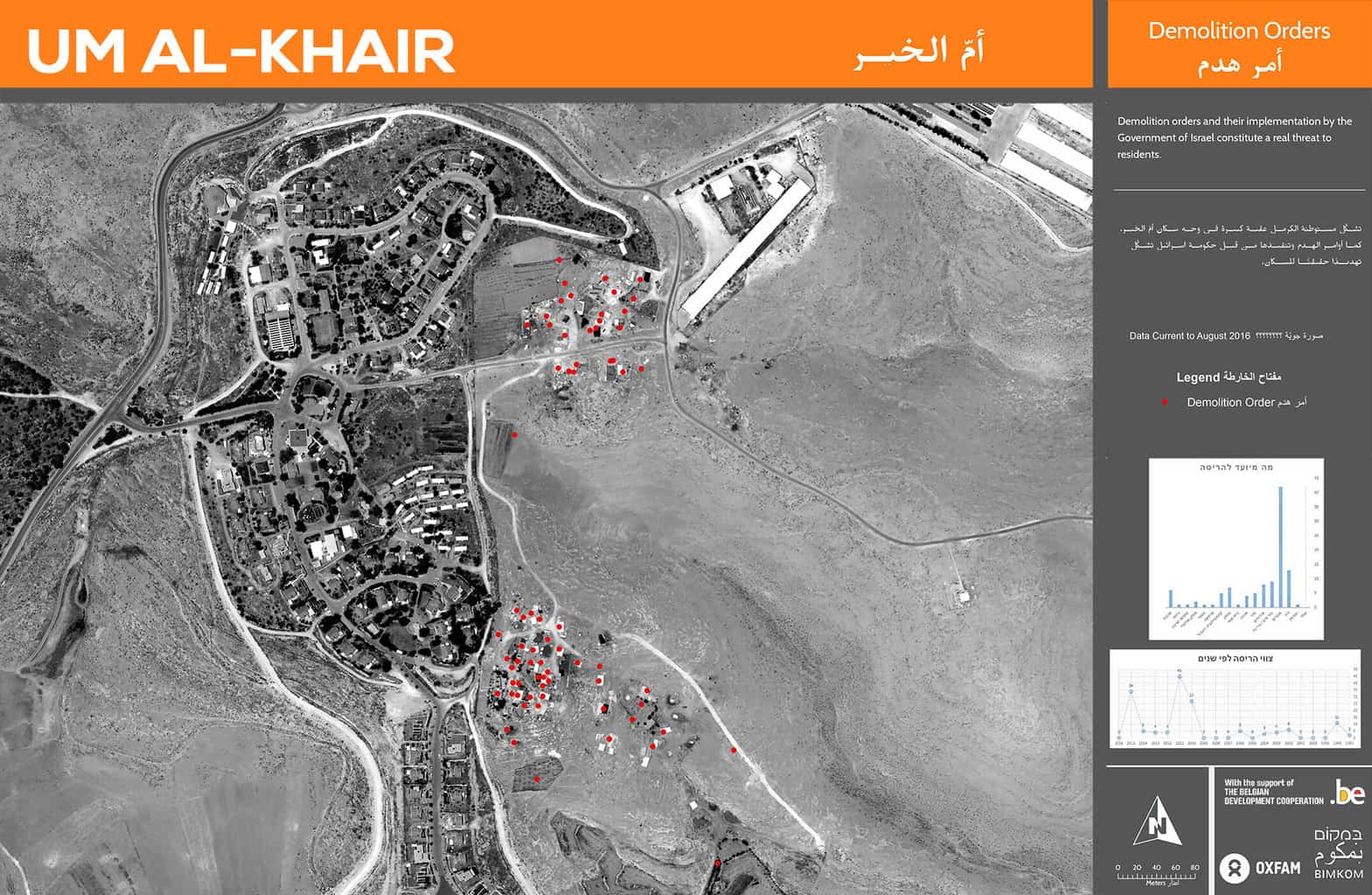 If Israel executes the 151 pending demolition orders, it will essentially wipe out the community of Um al-Khair. The map above shows the impact that the pending orders will have on the community. The information laid out by the map above, coupled with the history of demolitions in Um al-Khair, paints a clear picture. If left unchallenged, these orders will culminate in this small little community being driven off their lands once more.

According to the UN, there have been 20 home demolitions since 2011 that have displaced 154 people (103 of which were children). In total, 32 buildings have been demolished since 2011, impacting 213 people. There were three demolitions on October 27th and 28th of 2014, followed by the confiscation on November 1st of tents provided by the International Committee of the Red Cross. Tents were the only shelters for families made homeless during a very cold winter. It is clear–the community is facing an existential threat. 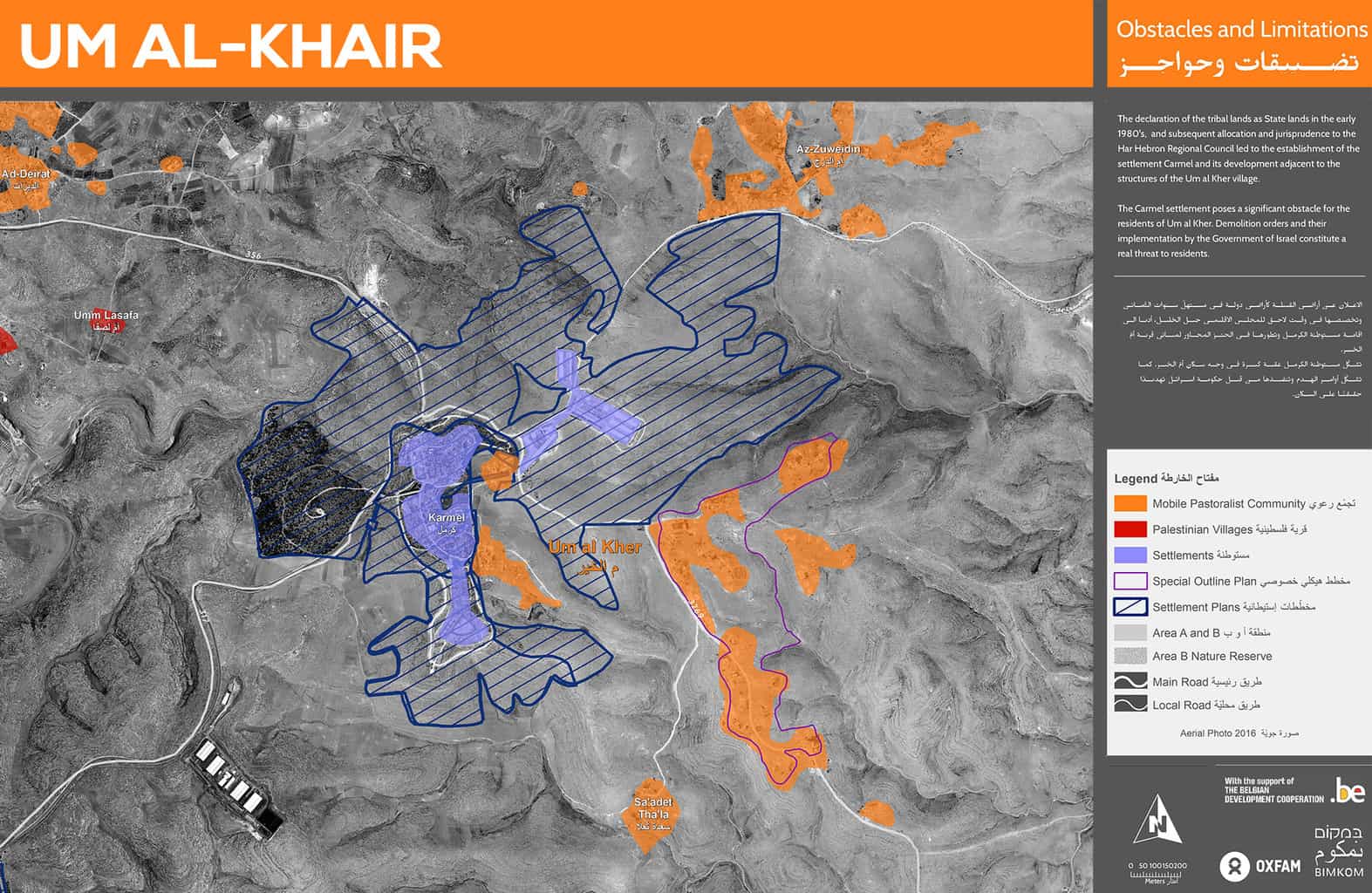 This map shows the current expansion plans for the Israeli settlement of Carmel. If executed, it will essentially encircle Um al-Khair, cutting them off from their flocks’ historic grazing lands. Map by Bimkom.

Under the Oslo Accords, the West Bank was separated into three areas of jurisdiction: Area A, B, and C. Um al-Khair is located on Area C, which encompasses 61% of the West Bank and is under full Israeli civil and security control. Therefore, permission to build on the land must be granted by the Israeli Civil Administration. Building permits are few and far between for Palestinians in Area C. According to B’Tselem, Israel has designated 70% of Area C (42% of the West Bank) to be state land, survey land, firing zones, nature reserves, national parks, and settlements. Meanwhile, they have built and preserved the apartheid wall, essentially annexing large swaths of Palestinian land behind the green line to Israel, thus limiting the opportunity for development of Palestinians lands.

In addition, the odds of being granted a building permit on the other 30% of Area C–the parts that remain in some way for development–is unlikely. Between 2010 and 2014 only 33 out of 2,020 (1.5%) were granted, with only 1 of those approvals occurring in 2014. This artificial scarcity of permits by the Israeli Civil Administration leaves many Palestinians with no choice but to build without a permit if they want a roof over their family’s heads, exposing them to the risk of stop-work orders and demolitions.

These land seizures are illegal under international law, such as under Article 49, alongside Article 2 and Article 6 of the Fourth Geneva Convention and under Article 12 of the International Covenant of Civil and Political Rights. Israel has ratified the Geneva Conventions as well as the International Covenant of Civil and Political Rights, meaning that the state is bound by these international agreements. Under international humanitarian law, in particular, common Article 1 of the Fourth Geneva Convention, the U.S. and other states that are party to the convention are obligated to ensure compliance by Israel with the obligations embodied in that Convention, and not to aid, facilitate or recognize the legality of international humanitarian violations carried out by Israel. The positive responsibility under Common Article 1 requires all states, including the U.S., to take all the appropriate measures that they can in order to end all violations of the law, reaffirmed by the UN Security Council Resolution 681 (1990), and ARSIWA Article 41.

It is important that you let your elected officials know your concerns about the pending demolitions in Um al-Khair. If you are a US citizen, please sign onto this petition and send a letter to your representatives urging them to take action and prevent the ongoing violence in Um al-Khair.

Our ability to stay active on the ground in the face of ongoing oppression and violence is reliant on your material support. Please consider joining this movement by being a money financial contributor to the Good Shepherd Collective.

*For tax-free donations, US citizens can use the Alliance For Global Justice here. UK citizens can make a GiftAid contribution through the British Shalom-Salaam Trust here.

The personal stories of Palestinians experiences of Israeli home demolitions.