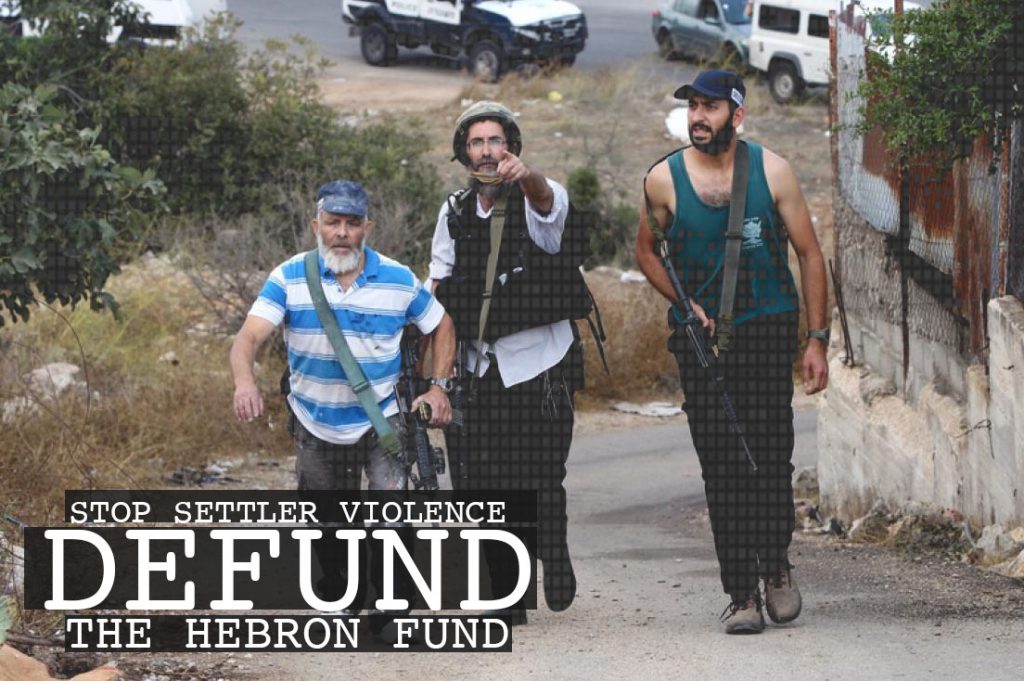 This February 25 will mark 26 years since Baruch Goldstein entered the Ibrahimi mosque in Hebron and opened fire on Muslim worshippers attending afternoon prayer, killing 29 people and wounding another 125. Baruch Goldstein was a radical settler and embodied racist values, but the Israeli program of settler-colonialism that made it possible for him to live in an exclusively Jewish Israeli settlement in Hebron, in occupied territory, is just as violent, racist, and aggressive. This structural violence has gone unabated for decades, impacting generations and generations of Palestinians living in Hebron.

Palestinian organizations in Hebron are making an urgent appeal for solidarity from US civil society, solidarity organizations, and institutions. We are urging the movement for human rights to join us in the call to defund the Hebron Fund, a radical settler organization operating in Hebron.

The systems of oppression operating in these lands–the Israeli military violence, Israeli settler attacks,  child arrests, and more, are cultivated and maintained, in part, by the Hebron Fund, a US-based charitable organization that exploits weak tax enforcement mechanisms to bolster the Israeli settler community in Hebron. The Hebron Fund is the largest known funder of the settler movement in Hebron. In 2013, it provided $1.7 million to Hebron communities. In 2003, it provided 45 percent of the community income, which ballooned to 55 percent in 2008.

Contrary to US tax law, the Hebron Fund directly sponsors:

Furthermore, individuals in connection with terrorist organizations could benefit from funds disbursed by The Hebron Fund.

We call on the New York State Attorney General, Letitia James, to revoke the Hebron Fund’s charitable status, knowing that US taxpayers are shouldering the burden for the tax-deductible donations given to this organization for the purpose of continued violence against Palestinians.

This campaign isn’t just about limiting the monetary and political resources of the Hebron Fund, but rather, working to create a legal precedent that can force a tightening of the use of US charitable designations that alt-right and hate groups have been exploiting to run their networks.

The Southern Poverty Law Center has compiled a list of nearly 900 so-called hate groups, most of them on the far right. An analysis found that 55 of those organizations are registered as charities, and eight are 501(c)(4) “social welfare” groups, which also enjoy tax exemptions.

This campaign is not just about defending the human rights of Palestinians through a legal determination, but rather, a call to make changes to the structures that help to allocate money to all hate groups.

We are asking for you as an organization to endorse the campaign and over the month of February spread this petition throughout your networks as we prepare to file a formal complaint to the New York Attorney General’s Office to investigate the charitable status of the Hebron Fund.