Help us mobilize on the ground

Palestine is dotted with remote, hard-to-reach communities that can only be reached with off-road vehicles. Help us to secure a 4×4 truck to haul activists, tools, and olive trees to some of the most vulnerable and marginalized communities. 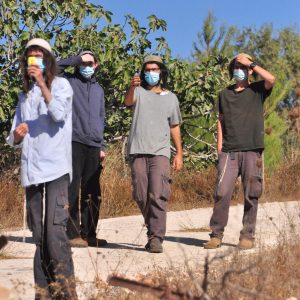 Stand in solidarity
Every year, Israeli settlers destroy thousands of trees. Your investment into suitable transportation helps keep the GSC and other activists on the ground in these at-risk communities.

Every year, the annual olive harvest takes place between October and November. There are more than 10 million olive trees cultivated across around 86,000 hectares of land in the West Bank, representing almost half–47 percent–of cultivated agricultural land. Between 80,000 and 100,000 families rely on olives and the production of olive oil for their primary or secondary source of income, and more than 15 percent of working women are employed in olive agriculture, as well as large numbers of unskilled laborers. In 2019, it was estimated by the Food and Agriculture Organization that the total olive oil yield for the West Bank was 27,000 tons.

Our lands are under attack

In recent years, settler attacks on agricultural lands across the West Bank have seen a rise–between January and October of 2019, OCHA recorded a monthly average of 27 attacks, whereas in 2018 there were an average of 25 monthly attacks, an average of 14 monthly attacks in 2017, and an average of 8 in 2016. These attacks result in Palestinian casualties–physical injuries, attacks, harassment by the Israeli police or military sometimes resulting in arrests and certainly stolen time–as well as damage to property.

Between January and October of 2019, the incidents reported resulted in the damage of over 6,200 trees, of which most were olive trees. Almost half of these were located in the Nablus governorate.

Ensuring Palestinians continue to plant olives is one important way that the international community can stand in solidarity with the Palestinian villages under threat. Consider making a donation of $25 dollars or more to gift these communities a brighter tomorrow.

Our work on the ground

How the Good Shepherd Collective is building a movement of solidarity

Miss us? We’ve got upcoming events for you!