Like other Palestinian communities, home demolitions and land confiscation cause almost insurmountable monetary damages.  As the devaluation of their land and livestock continue to impact the community’s livelihood, finding tangible ways to mitigate impact Israel’s colonial project in the South Hebron Hills is crucial. Per the request of the village elders in Um al-Khair, the Good Shepherd Collective in coordination with the local community and international volunteers installed a greenhouse in the southern section of Um al-Khair. The installation of the greenhouse continues to provide a space for the villagers to grow their own food, sell the produce in the market, and creates a space for internationals to volunteer. The greenhouse acts as a social justice indemnity from the decades-long suffering this refugee community has faced.

A community of refugees, the village of Um al-Khair was established after the Hathaleen tribe was driven off of their lands in al-Arad during the 1948 war. Eid Yamen Hathaleen purchased the lands of Um al-Khair from the Palestinian villagers of Yatta in 1960s. While the family has the deed to the property, they are not allowed to develop their lands because of the multiple legal obstacles facing Palestinians residing in Area C. Since the establishment of the Israeli settlement of Carmel next to Um al-Khair in 1980, the people of Um al-Khair have experienced destructions on different parts of their village 20 times according to OCHA data. To this day, all but one structure has a demolition order pending in the Western portion of Um al-Khair. If executed, it will displace some 80 Palestinians, the vast majority of which are children. Across all of Um al-Khair, there are 63 pending demolition orders, putting at risk hundreds of Palestinians.

On September 11, 2017, the Israeli military arrived at the community of Um al-Khair and installed several hundred yards of razor-wire fencing through their lands that effectively cut off the historical grazing paths for their herds. Additionally, maps retrieved from Bimkom, a Jerusalem based on NGO that works on zoning and planning rights, reveals the settlement of Carmel’s expansion plans are set to surround the village of Um al-Khair. As a Bedouin community, their flocks are the central income for the community. The additional restrictions on their movement pose added economic hardships that will have an immediate and permanent impact on the community’s livelihood. The greenhouse project allows the community to diversify their revenue streams, helping to alleviate a small part of the economic damages. 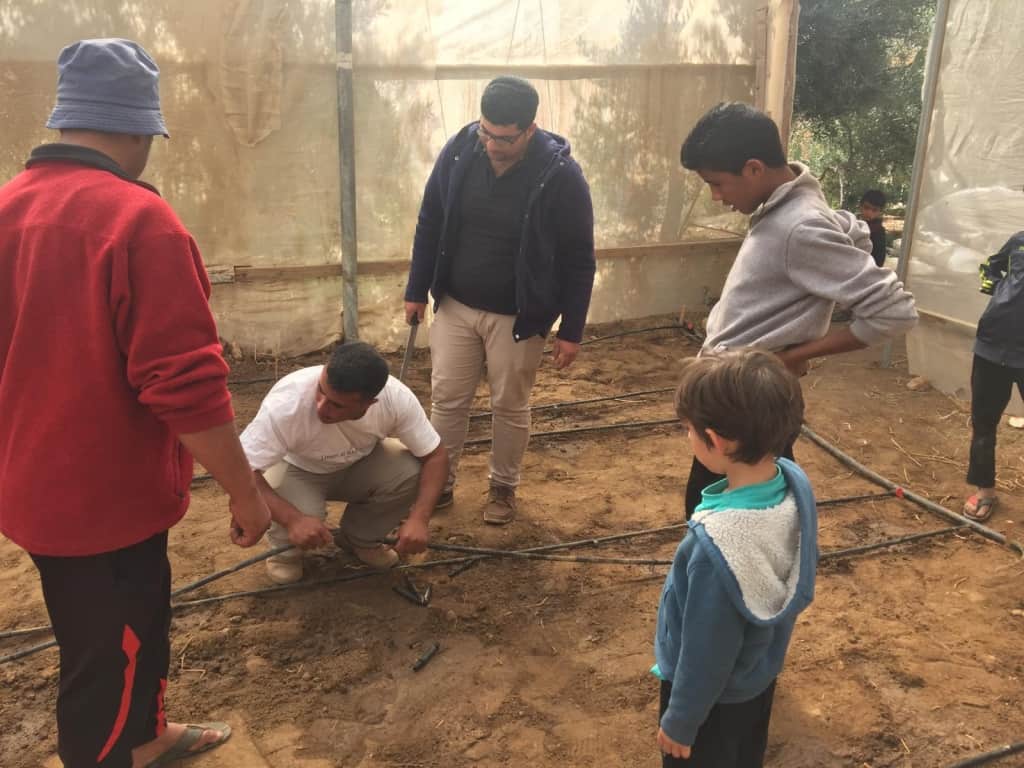 A workday in the greenhouse.

How the greenhouse helps

A half dunum greenhouse can produce 6000 to 7000 kilos of cucumbers per growing season, with potentially three seasons a year, which can be sold the local market in Yatta for 2 shekels per kilo. The greenhouse may also be able to produce roughly 8000 to 9000 kilos of tomatoes per growing season, with two growing seasons a year and could be sold for 2 shekels per kilo, according to the Palestinian Ministry of Agriculture. The agricultural yield could produce 12000 to 21000 ₪ before costs (seedlings – 1000 ₪, pesticides and fertilizer 3000 ₪, and greenhouse 15000 ₪).

The building of the greenhouse serves as a rallying campaign and as a means to keep people engaged in the community of Um al-Khair. More than just agriculture, the project is designed to promote an exchange of ideas between movements. Those who have little or no background in the history of the Palestinian struggle are encouraged to join us in tangible ways on the ground, join a tour, and make a financial contribution to the community.

Our ability to stay active on the ground in the face of ongoing oppression and violence is reliant on your material support. Please consider joining this movement by being a money financial contributor to the Good Shepherd Collective.

*For tax-free donations, US citizens can use the Alliance For Global Justice here. UK citizens can make a GiftAid contribution through the British Shalom-Salaam Trust here.