Palestinians injured, but remain to work

On October 13, 2020, Good Shepherd Collective returned to the Faza’a campaign activities to assist those working on completing their harvest this season. For the second day in a row, those involved in the campaign headed to Burqa’s small village, a small Palestinian village located southeast of Ramallah.

Yesterday, the residents and activists present were unable to harvest as they were harassed. Several of them were beaten by the many hilltop youth settlers who have constructed a small tent just north of the village, on a hilltop overlooking the olive grove. The Israeli military was present but merely watched as Israeli settlers attacked several Palestinians. According to locals, Israeli settlers erected the illegal outpost in the last few days. If successful, it will mean a new, permanent, illegal Israeli construction and takeover of this space that belongs to Burqa’s residents. Already, Israeli settlers have obstructed roads leading more directly to and from the village of Burqa. 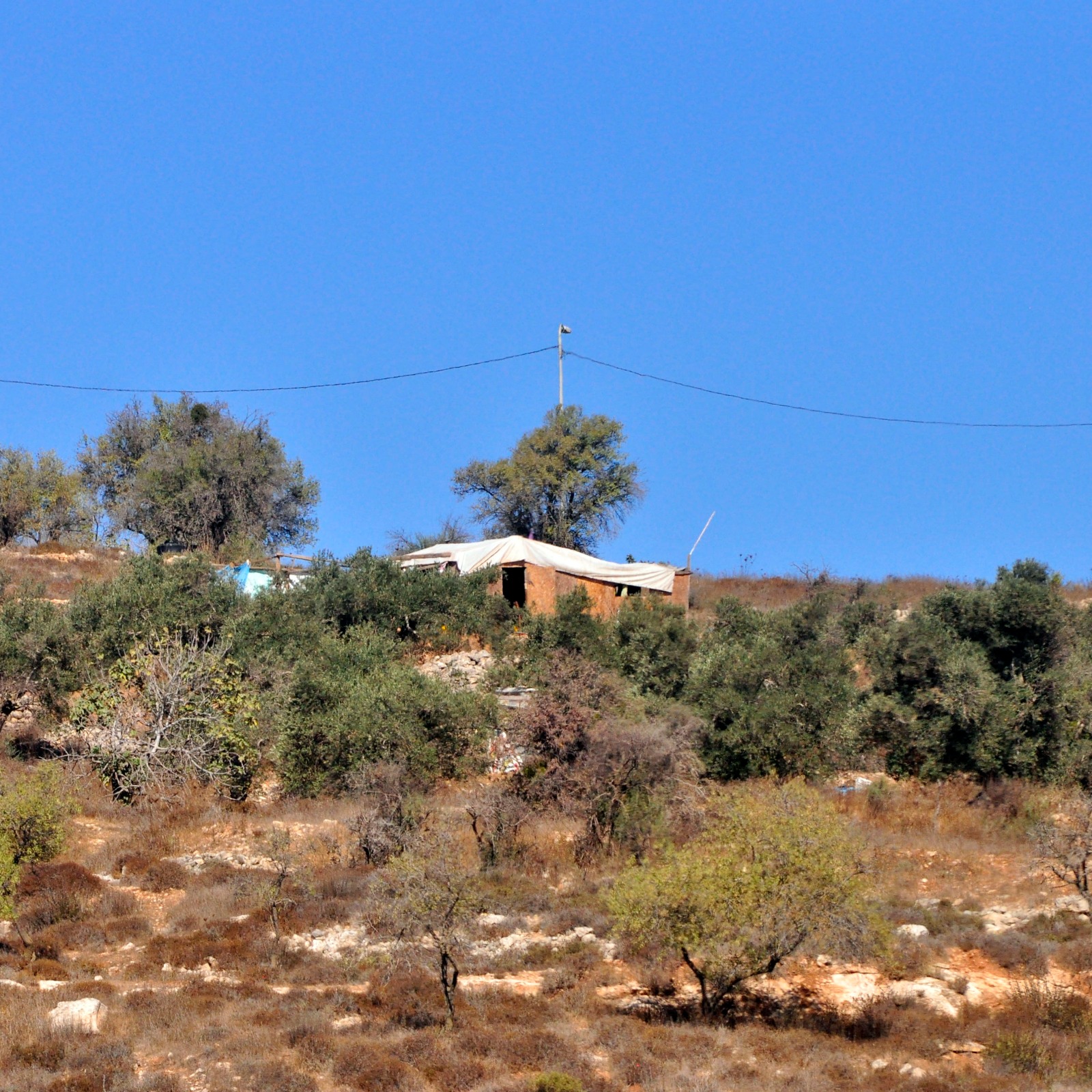 As soon as we exited our vehicles this morning, we were able to see the settler youth hovering over us from atop the hill, approaching from several angles, and keeping a close eye on the activists. Residents and activists converged, beginning to climb the hill on our way to the olive trees, and were met almost immediately by a few settler youths who attempted to stop us. In front of an Israeli news camera, the one young settler who approached the group to halt our movement engaged with one of the organizers, speaking for several minutes. The organizer explained what the group was doing here and that this was privately owned land, privately owned olive trees, as some of the group continued to move toward the trees.

Suddenly, the settler youth—standing literally within inches of numerous Palestinians, activists, and media personnel—lifted his shirt, threatening to pull a hidden knife out of his pocket. Immediately, one of the organizers attempted to grab him and prevent him from using the knife. As a result, multiple settler youths descended the hill toward the activists, chasing media personnel with a knife and hurling huge stones at everyone indiscriminately, including the elder Palestinian women there to harvest their own crops, and media personnel. The organizer who attempted to stop the initial settler youth with the knife tumbled down the hill, hitting his head and having to be rushed to the hospital along with another human rights activist. Both of them, as well as others, were hit directly with pepper spray by the settlers. 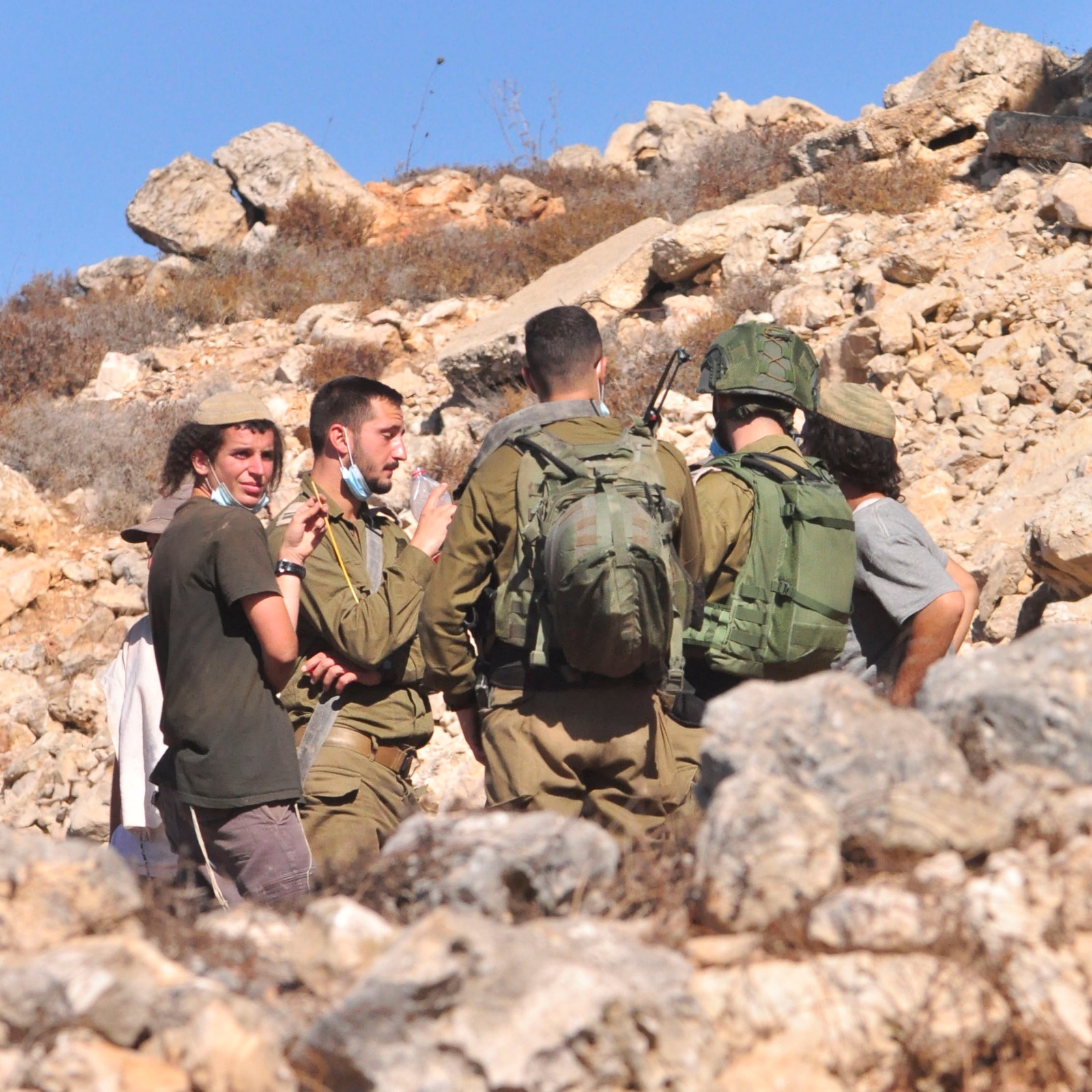 Soldiers confer with settlers as soon as they arrive on the scene,

Activists retreated quickly, as more settler youths arrived from the hilltops and continued to hurl stones. After a period of separation, the military arrived, conversing with the several settler youths and making Palestinian residents and activists wait over an hour in the sun to answer what would happen. According to some of those who were present yesterday, an Israeli military captain had promised access to their land under military protection the day before.

Finally, tired of waiting and painfully aware of the military’s role as guardians of the settler movement, Palestinian residents and activists decided to make a move to pass into their lands and begin the harvest. They were successful, although the settlers continued to hover nearby as Palestinians harvested nuts and olives and enjoyed having access to the land.

Though this land in Burqa is particularly important, as it represents a new potential land grab by Israeli settlers, the real value in protective presence during this period of olive harvest is in that it allows Palestinians to access their crops, remain on their land, and continue to meet their economic needs. Without these kinds of joint efforts, we know only too well that Palestinians will be prevented from reaching their lands, driven away, and continue to grapple with endless theft of their property.

Yes, it is important to show settlers that we will remain steadfast and cannot be intimidated away, and it is important to stand in solidarity with one another. But the reality is that without support that allows them to meet their basic economic needs, Palestinians will not be able to sustain themselves on the land—particularly during increasingly difficult economic circumstances.

We are grateful to have been able to stand with our partners as we work to support one another, and grateful that today was a success in the sense that local residents were able to access, harvest, and enjoy their land. Days like these are increasingly rare, and it is important that they do not go unnoticed.

You can learn more about the Faz3a campaign here. 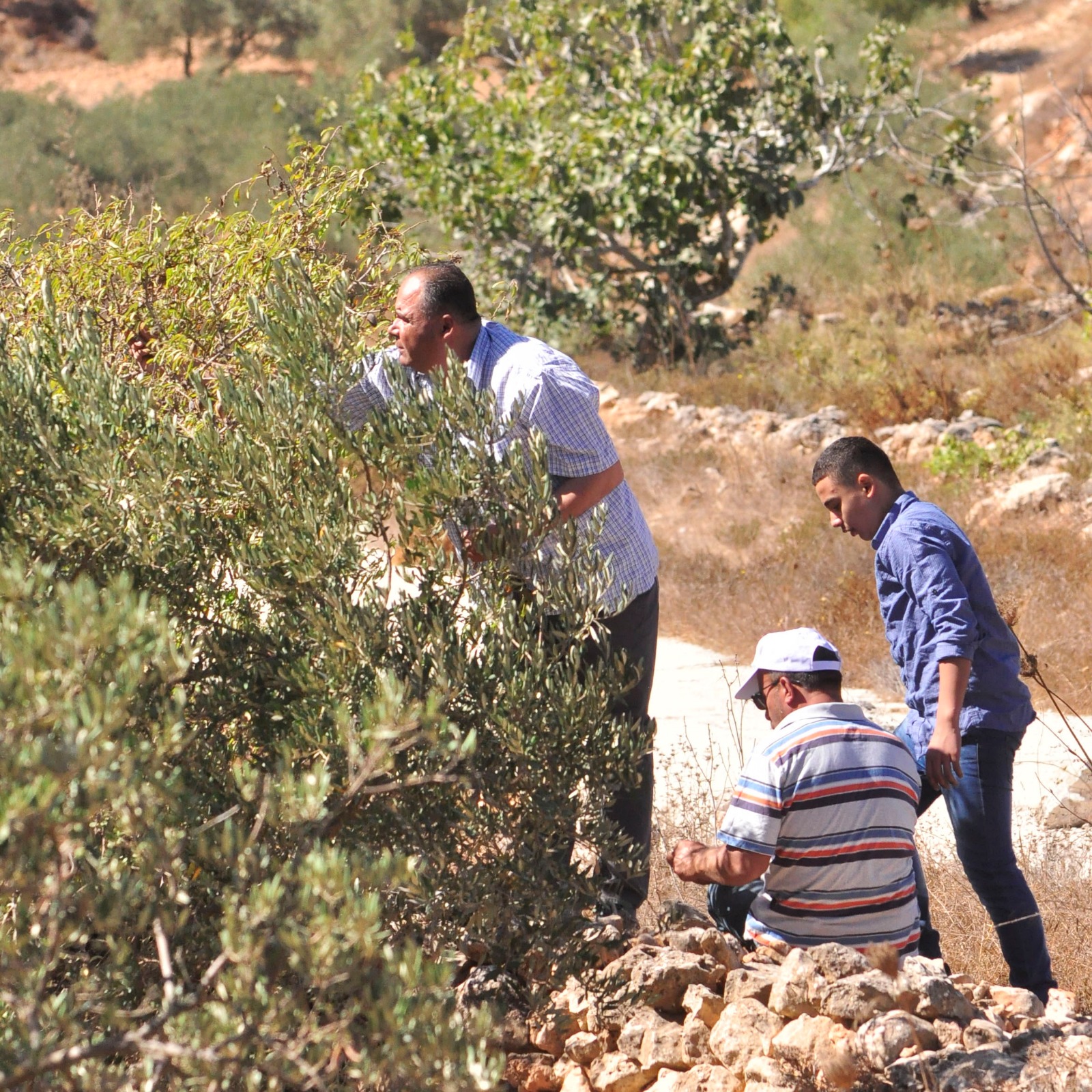 Palestinians are able to access their olive trees and begin the harvest after two days of struggle.

Stay up to date

As we move forward with developing principled programs of resistance and building a broad-based, diverse network of individuals and groups willing to challenge the policies and law that perpetuate the oppression and violence, your material support is essential.

We need your solidarity

As we continue with this work, we are asking you to join our current “Drive for $5” donation campaign. We are building a model of grassroots mobilization that rejects the restrictive and oppressive models of neoliberal foundations and nation-state aid. We are asking individuals to invest $5 a month to continue this work. You can do that by clicking this link here. If you want to make a larger donation there are other options. If you are a US citizen and want to make a tax-deductible contribution, you can do so through the Alliance for Global Justice by clicking here. If you are in the UK, you can use our partners the British Shalom-Salaam Trust and use GiftAid.